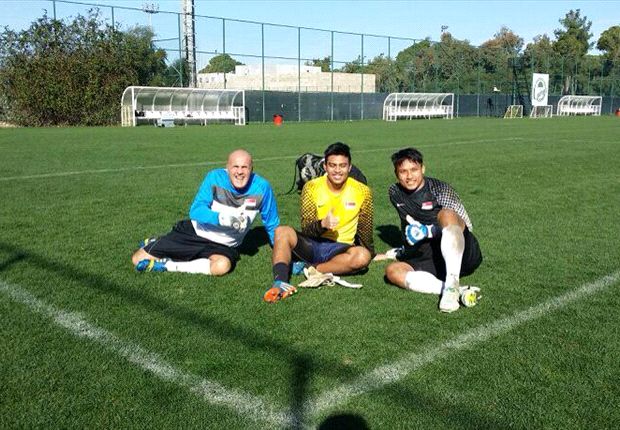 Burridge reveals that the soccer knowledge of the Filipinos is such that hardly anyone of them has any idea about Diego Maradona and when he mentions the name Maradona to them, they ask if he was talking about the singer Madonna or what.
END_OF_DOCUMENT_TOKEN_TO_BE_REPLACED

In the 2016 AFF Suzuki Cup, Philippines was pitted in the same group as Thailand and the head coach of the Philippines national side has talked about what it’s like of being placed with the current champions as well as with Singapore and Indonesia.
END_OF_DOCUMENT_TOKEN_TO_BE_REPLACED

She was definitely thrilled with the opportunity that she was given. It is definitely the dream of any young player to move on to national teams and that the opportunity would be given to her so early was beyond her expectations. She had helped her team win silver in the tournament that encompassed eight teams. She stated that initial days were hard as most people missed their homes, but that also built the closeness of the team and helped them to win the match. Even though the practices were grueling it was a good experience for her. END_OF_DOCUMENT_TOKEN_TO_BE_REPLACED The progress in Phillippines soccer did not come magically since it took some work to get there. The foundation was laid on by German coach Michael Weiss, and they have keep improving under their current coach Dooley. END_OF_DOCUMENT_TOKEN_TO_BE_REPLACED

The Philippine men national team nicknamed Azkals moved up FIFA ranking from the previous 135th position to the current 116th in the world. In the comparison for Asian countries, Philippine soccer team were placed 16th overall in the Asian Football confederation.

The Iranian national team received a huge profile leap after being ranked 1st in the Asian Football Confederation and 42nd in the full list by FIFA.

The Azkals recently finished third in the group H world cup qualifying campaign. This is believed to be one of the reasons for the huge leap by the Philippine national team. The team also had an historic 3-2 win over tough opponents North Korea but lost the chance to play at the world cup finals. Despite the loss, the team will advance to the third round of the 2019 Asian Football Confederation cup.

Aside Iran in first place in the Asian ranking, Australia are in second place, Korea Republic next in line before Japan, Saudi Arabia, Uzbekistan and United Arab Emirates respectively. China Republic, Jordan and Qatar completed the top ten list in Asia. END_OF_DOCUMENT_TOKEN_TO_BE_REPLACED

The 2018 FIFA World Cup qualification draw results has already been announced and some nations were lucky while some others did not have such a pleasant placing and Sweden is one of the unfortunate ones as the Sweden nation was placed in what is considered to be the toughest group as they have to play against the likes of: France, Bulgaria, Belarus, Luxembourg and Netherlands.

Group A is already being labeled as the group of death due to the amount of top class nations and Sweden has their work cut out if they want to advance into the next World Cup.

Before having any hopes of qualifying to the 2018 World Cup, Sweden has to focus in advancing through the 2016 Euro’s and so far they have managed to hold their ground and are located in the 2nd spot of Group G with 12 points having been gathered from the 6 matches which have been played so far at this point in time.

One of the issues that the Sweden national side might face is the fact that the team of Erik Hamrén is starting to build a dependency on ZlatanIbrahimovic and this is evident by the amount of goals that Sweden has been scoring in their past few matches. END_OF_DOCUMENT_TOKEN_TO_BE_REPLACED

Former Italy defender Fabio Cannavaro has revealed that the process of qualifying for the World Cup will always be difficult and this is especially true in the case of the European teams for the 2018 edition.

The former Real Madrid and Juventus star was recently part of the qualification ceremony for the upcoming tournament. Group stages have been announced for the qualification phases. Cannavaro is one of the experienced players to be able to talk about qualification for this tournament. After all, he has managed to feature in four world cups in his stellar career. There was a crowning moment when he led the team to success in the 2006 edition.

Cannavaro says that he is not worried about other teams failing to make it into the tournament as long as Italy reach the finals. The future of the Italian national team continues to be under doubt. After being knocked out at the two stages in the last World Cup, they were expected to perform well under the regime of Antonio Conte. However, the former Juventus manager is yet to imprint his stamp on the team. Italy have been given a tough group for qualification, as they will be alongside 2010 World champions Spain. END_OF_DOCUMENT_TOKEN_TO_BE_REPLACED

A few days ago it was confirmed and revealed to the public that 13 U.S senators have asked the international soccer organization FIFA to start considering another country instead of Russia as the host for the upcoming 2018 World Cup.

One of the main reasons of why these senators do not want Russia to host the forthcoming competition is because of the ‘’ ongoing violations of the territorial integrity of Ukraine’’.

There were a number of lawmakers hailing from U.S. which are saying that allowing the 2018 World Cup to take place will inappropriately bolster the prestige of Vladimir Putin when it should be condemned instead of improved.

These lawmakers include: The Wisconsin Republican Ron Johnson, the Illinois Democrat Richard Durbin and the Arizona Republican John McCain. All of them have told the former FIFA president Sepp Blatter to start considering using another country as host instead of Russia as it’s simply not the ideal location according to them. END_OF_DOCUMENT_TOKEN_TO_BE_REPLACED

Talking about Falcao, the Colombia boss said, “Look, it’s quite difficult for the player himself as well. It’s a bit of a mess. But, at this point of time, we need to take care of him. He is a special talent, an asset for the side.” END_OF_DOCUMENT_TOKEN_TO_BE_REPLACED